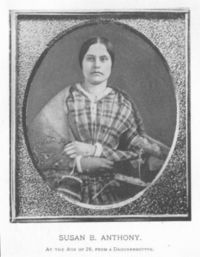 Susan B. Anthony was born February 15, 1820, in Adams, Massachusetts, to Daniel and Lucy Anthony. It was a family of Quakers who believed liquor was sinful and slavery needed to be abolished.

Susan was a bright child and learned to read and write at the age of three. In 1826, the Anthony family moved to Battenville, New York, where Susan attended school. Susan was eventually taken out of school and taught in a “home school” set up by her father. The school was run by a woman teacher, Mary Perkins. Perkins offered a new image of womanhood to Susan and her sisters.

Susan was headmistress at a female academy, Eunice Kenyon’s Quaker boarding school in upstate New York, from 1846-1849. A friendship with Amelia Bloomer led to a meeting with Elizabeth Cady Stanton who became her life partner in political organizing. In 1849 Susan was elected president of the Rochester branch of the Daughters of Temperance and raised money for its cause. In 1853 Susan was refused the right to speak at the state convention of the Sons of Temperance in Albany. She left the meeting and called her own. In 1853 Susan and Elizabeth Cady Stanton founded the Women’s State Temperance Society with a goal of petitioning the state legislature to pass a law limiting the sale of liquor. The state legislature rejected the petition because most of the 28,000 signatures were from women and children. Susan decided that women needed the vote so that politicians would listen to them. She and Stanton were criticized for talking too much about women’s rights and resigned from the Women’s State Temperance Society.

In 1870 Susan campaigned vigorously for women’s suffrage on speaking tours in the West. In 1872, in an attempt to claim that the Constitution already permitted women to vote, Susan cast a vote in New York for the presidential election. Susan and her three sisters were arrested. Susan refused to pay the streetcar fare to the police station because she was “traveling under protest and it should be paid at the government's expense.” At her trial in Canandaigua in 1873, the judge fined her $100 and made her pay courtroom fees, but did not imprison her when she refused to pay, therefore denying her the chance to appeal.

In 1877, she gathered petitions from 26 states with 10,000 signatures but Congress laughed at them. She appeared before every congress from 1870 to 1906 to ask for passage of a suffrage amendment.

In 1979, Susan Brownell Anthony’s image was chosen for the new dollar coin, making her the first woman to be depicted on U.S. currency.

A poem by Susan B. Anthony

"No ministering angel, she

To bind up wounds or cool the fevered brow

With the soft hand of pity.

She was of that sterner stuff

With tearless tenderness that found expression

In deeds of battle for the cause of right.

Hers was the warrior soul

Locked in a woman's heart,

Predestined to do battle.

Nobly she strove, yet sacrificed no whit

Of that true womanhood

Which was her high ideal.

A lady valiant, she,

Semiramis of suffrage, who enlarged

The boundaries that spaciously enclose

Great were her labors, great her victories,

As liberty attests. The pay be hers.

Yet this her greatest glory-

That though opposing and opposed thereby

To stale conventions by the world esteemed,

She overthrew them; yet at last still held

The love of women and respect of men."